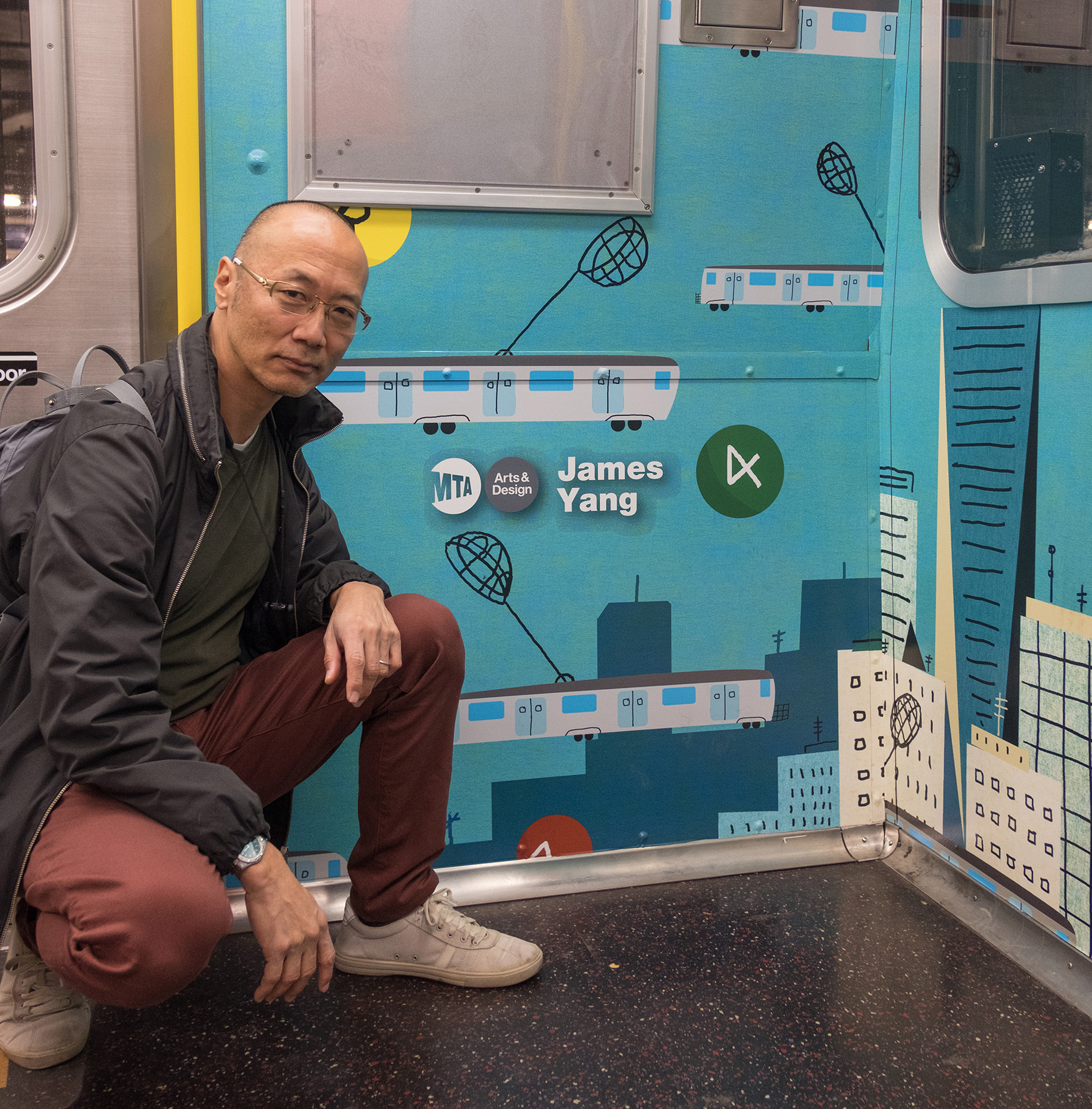 James Yang was born in Oklahoma and graduated from Virginia Commonwealth University with a Bachelor of Fine Arts degree in Communication Arts and Design. Within a few years of entering illustration, his work appeared in prestigious trade publications such as Communication Arts, 3×3 Magazine, Graphis, Print, and The Art Directors Club of New York. James has won over 250 awards for design and illustration including best of show  from 3×3 Magazine. He has taught and lectured at a variety of institutions including SVA, Parsons, FIT, SCAD and was an executive board member for ICON, a biennial illustration conference. His book, Bus! Stop! was selected as an outstanding picture book by The New York Times and the follow up Stop! Bot! is the 2020 Geisel award winner for the most distinguished American book for beginning readers..  His subway wallpaper can be seen on trains in the Metropolitan Transit system.  James currently lives in Brooklyn where he happily works for a variety of clients and books. 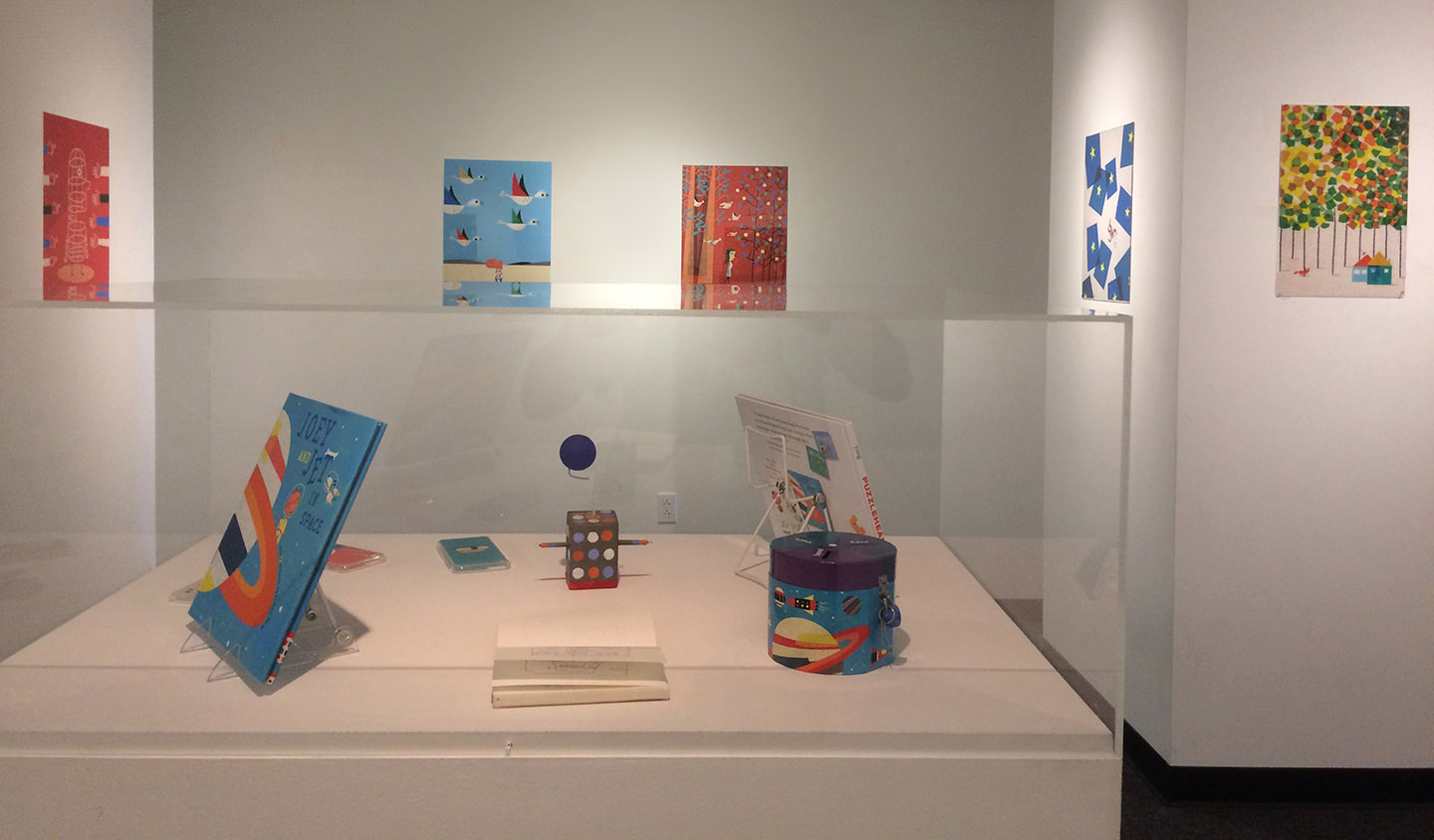 “I love how James turns complicated concepts into playful colorful solutions. I can always rely on James to make my job easy.”

“James is a sure thing for any art director—his art will be sensational, and he’ll deliver his work effortlessly.”

“James Yang is a funny guy. His work is delightful. It’s full of interesting, often whimsical ideas presented in bright, saturated colors. What’s not to like?”

“James is one of my favorite artists. His work is beautiful, witty and wholly original. He has created his own world, a place we want to visit often for visual refreshment and and mental nourishment. Three cheers for James Yang.”

“It is always a challenge finding an illustrator who can deliver the eight illustrations for Morningstar Advisor magazine within a month. The subject matter is abstract and often difficult to understand and represent. I was attracted to James’ abstract, playful style, and felt that it would be a good fit to the spirit of our publication. Once I spoke with him, I realized how multidimensional and knowledgeable he is—he was the first illustrator I worked with who revealed that he is an investor. From the onset of the project, it was clear that James wanted to deliver the best possible work. He is open to criticism, and gently stands his ground when he believes in his decisions. Collaborating with James was a joy.”

“It’s been my pleasure to work with James many times — I can always depend on him to devise a creative solution that offers a strong and inventive connection to the topic at hand. He’s fantastically talented, requires little direction, and has an amazing knack for humanizing technology and business issues — his work is always smart, has an unmistakeable look, a gorgeous palette, and some wonderful glimpses of his characteristic humor. One of my all-time favorite illustrators”

“James Yang always come to mind when I need an illustration for a particularly complex idea. He distills abstraction into clarity with minimal line, bold color and unique images. James says so much with so little. James is amazing.”

“James Yang is one of the most original illustrators to come along in the last 50 years. When I see his work featured in a magazine, I immediately know that the art director, editor and publisher understand the power of what a really good illustration can bring to an article. James always offers a unique and wildly creative approach to any editorial concept you can throw at him. The man’s a genius with problem solving.”